More children are out of school in poor countries

The rate and number of out-of-school children are strongly correlated with national income: in poorer countries, more children are out of school than in wealthier countries.

The World Bank classifies all countries according to their gross national income (GNI) per capita (World Bank, 2017). The map in Figure 1 shows the distribution of countries by income level according to the July 2016 classification. Low-income countries with the lowest per-capita income are concentrated in sub-Saharan Africa. 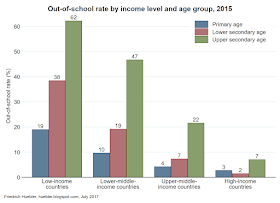 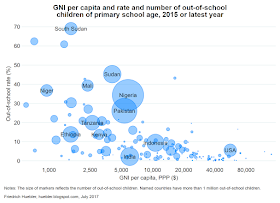 A recent policy paper by the UNESCO Institute for Statistics and the Global Education Monitoring Report (UIS and GEMR, 2017) examines the link between education and poverty. The paper concludes that reaching the Sustainable Development Goal of universal primary and secondary education could reduce the global poverty headcount (measured by the number of persons living on less than $1.90 per day) by more than 420 million, or more than half of the current number.